Looking for a summer read? Look no further! We’ve complied a great summer reading list, many of our picks having to do with law, estate planning, or wills, and a few beach read office picks. Let us know what you think of the books we picked and suggest your own summer favorites in the comments!

The Last Will and Testament of Zelda McFigg by Betsy Robinson
The 2013 winner of Black Lawrence Press' Big Moose prize, The Last Will & Testament of Zelda McFigg is the fictitious memoir of 49 and 1/2 year old Zelda McFigg written as her last will and testament. She truly believes that she could have been a huge celebrity, if only people had been able to see her "inner beauty and star quality." Zelda takes the reader on a wild ride through her life, and she touches upon the qualms many people have with the media-struck age we now live in. If you're looking for a light hearted and relatable read this summer, this is your book.
Barnes and Noble: 4.6/5

The Testament by John Grisham
Just one of many John Grisham legal thrillers, The Testament, takes readers on a wild ride through the streets of Washington D.C. to the jungle of Brazil and then back again! Just a few hours before his death, millionaire Troy Phelan rewrites his will leaving his family out and giving his fortune to an unknown woman in Brazil. Attorney Nate O'Riley is tasked with the job of finding this mystery woman, all while Phelan's family is none too happy about the new will. This thriller will keep you on the edge of your beach chair.
Barnes and Noble: 4.1/5

The Will by Kristen Ashley
Josephine Malone is a jet setting assistant to a fashion giant, and when her grandmother passes away, she assumed she'd be inheriting her house and maybe some money. She never expected what was coming to her at the will reading. Kristen Ashley fans claim that The Will is one of her best novels, and they say it follows her true romantic style. If you're looking for a romance to sweep you away at the beach this summer, then The Will is definitely your summer read for 2016.
Barnes and Noble: 4.5/5

The Last Will and Testament of Henry Hoffman by John Tesarch
What is it with men leaving their fortune to mystery women? Like Troy Phelan, Henry Hoffman leaves his fortune to an unknown woman, and his children are left to pick up the pieces and find her. The Last Will and Testament of Henry Hoffman takes you through the remarkable life and Henry and the trials and tribulations his children face during their lives and after their father's death. It is a story of "love and loss, conflict and survival" (goodreads.com) that almost everyone can relate to.
Goodreads: 3.3/5

Last Will and Testament by Dahlia Adler
Almost everyone remembers what it's like to make the change from high school to college, but things take a turn for the worst for Lizzie Brandt. When her parents die in a tragic accident during her freshman year, she discovers that they appointed her as the guardian of her younger brother. She is forced to grow up a lot faster than she expected to, and finds solace in her History TA. Last Will and Testament turns into a classic love story where the love threatens everything that means the most to the couple. This is a great novel for young adult readers, but would also be great for anyone looking for another love story.

Elaine: The Lincoln Lawyer by Michael Connelly
Of course Attorney Dalton suggested a law themed book! The Lincoln Lawyer, which is also a movie starring Matthew Mcconaughey for those of you not into reading, is the story of attorney Mickey Haller who runs his criminal defense practice out of the back seat of his Lincoln town car. Haller seems to have landed the case of his career, but will something get in the way? 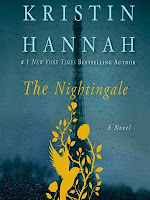 Melody: The Nightingale by Kirsten Hannah
The Nightingale is the captivating story of the journey of two sisters through the treacherous time of World War II in Europe. This book captures life through many different lenses, making the reader care about more than just the tragedies of war but also the lives, loves, and losses that these women have.

Colleen: The Farming of Bones by Edindge Danticat
"I read this novel for one of my history classes at UMass Amherst, and I really loved it because it teaches you about such an unknown part of history, the 1937 massacre of Haitians, without making it feel like a history class. It is such an easy read and is a book that still sticks with me many years later. "

What Does Attorney Dalton Do? 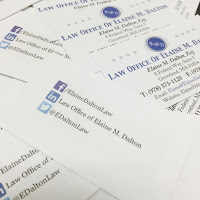 Yippee our first blog post! The following blog post was from a paper Colleen, the newest member of our office, wrote about Attorney Dalton for her career class at UMass Amherst. Ever wonder what it's like to be Attorney Dalton, or an attorney in general? This post should answer many of your questions!

From my time here at UMass, though, I have realized that law school is something that is not in my near future, but I have not ruled it out entirely. I have spent the last eight years, between high school and college, rigorously pushing myself academically, and I can honestly not fathom another three years of intense schooling right now. I still have an interest in law, but right now I am very much more interested in getting my feet on the ground with work experience and taking the chance to live on my own.

That being said, I am still interested in one day pursuing a degree in law, even if it is not in the area that I originally considered. For my informational interview, I spoke with a lawyer in the law office that I have periodically interned in over the past 3 years, and currently work for as a social media manager and office assistant. The office focuses on elder law, and I have been able to see a little bit about what that means from witnessing will signing and putting together files, but the informational interview gave me a better look into what that truly means. I spoke with Elaine Dalton, who is the head lawyers in the office, and she gave me some insight into what a typical day is like for her and other elder law attorneys. She said that 50-75% of her day is spent meeting with clients doing estate planning and probate, dealing with nursing home and medicare issues, and working with real estate. The rest of her day is spent returning phone calls and emails and generating written communication. She also said that although this is a rough guesstimate of where her time is spent, there is no typical day and that all clients are different. Elaine may spend most of her day in her office meeting with younger clients or may spend her day traveling to meet with clients who are unable to leave their house or nursing home. Drafting wills and working with medicare applications may sound boring, but because each day is so different, it can be very exciting and challenging.

When asked why she has been able to establish a successful practice and continue to grow it, Elaine said it was because she works to relate to her clients on a personal level and doesn't speak to them in "legalese." She assumes that her clients know nothing about the process they are about to go through, and she makes sure they understand everything to the fullest degree.

Elaine talked about how she stays relevant in her field. Elaine takes classes from the MCLE, or Massachusetts Continuing Legal Education, and does other work in order to stay up to date on the newest laws and ways to practice. She talks with other attorneys about the way they are doing their work and follows different law news outlets to see when laws change. I believe that this is important to be your best in any field and to see it working so well for her encourages me to keep up with my education once I am in the "real world."

Elaine did mention that law school is extremely challenging, and that she knows many people who did not pass the bar the first time they took it but also that I should not be discouraged if I ever choose to attend law school because she loves her job, practice, and being able to help people with what she is doing."

We hope you learned a little bit about Attorney Dalton and what she does! And make sure to follow our blog for more stories and updates!

Posted by Unknown at 8:46 AM No comments: